Monte Cassino Battlefield tour for Poles: why they were in Cassino Area

When I’m working as a Tour Guide on the WW2 Battlefields of Monte Cassino, people are sometime asking me why the Poles took part to the battle, and what they did. The Battle of Montecassino is so well know by the Poles because it is one of episodes of the Second World War, marked  by bravery and success. In every article or book on the Italian Campain, there are some lines dedicated to Monte Cassino and what happened here 73 years ago. The Italian Campain lasted from July 1943 to May 1945.

Monte Cassino Battlefield tour for Poles: the arriving of the II Polish Corps

The Allied Forces landed on Sicily and they were successful because the German reinforcements arrived too late. The Polish II Corps did not take part in the Sicilian operation because in July-August 1943 the Poles were still in the Middle East. Then the Allies landed in Italy, the American were direct to Cosenza and Neaple, while the British were sent to east, to Taranto, Foggia and Termoli. German tactics were very clear. They wanted to slow the Allies down and to inflict them with the maximum amount of casualties. The II Corps began to arrive in Italy at the end of December  1943. Their first introduction to the sunny Italy started in the mud and the snow.

The base camps were established near Bari and Brindisi, far away from the first line, but always under a lot of rain and snow. The transfer from Egypt to Italy took several weeks, and the integration in the British VIII Army was difficult. The British VIII Army was like a collage. In Africa it war formed mainly by British, Indians and Commonwealth regiments, but in Sicily the “Free French” were added, and between them the most numerous part were Algerians, Maroccans, Madagascans and even Tahitians. Even the Poles were familiar with multi-ethnic societies. they themselves included Poles, Belarusians, Jews and Lithuanians.

General Wladyslaw Anders controlled 15-20 percent of the VIII Army’s strength. Among the twenty divisions which participated to the Italian Campaign three were depended on exiled governments based in London. The French Expeditionary Corps with 112.000 men, the Polish II Corps with 55.000 men and the 3rd Greek Mountain Brigade with 18.000 assigned to the British 13 Corps. We must remember and other very important thing the Poles shared with the Canadians: both of them have to participate to the war without being represented in the strategic conferences. All the decisions were taken by the “Big Three” America, UK and Soviet Union.

General Leese, commander of the VIII Army asked Anders on 24 March 1944 if the II Corps could participate to the coming battle, even if it was clear to Anders that his men were still very weak to fight, but he also knew that if he had declined, he could have seriously damaged the reputation of the Polish Corps. When he arrived next to Cassino, he had already a lot of information about what had already happened there, and the mistakes the Allied had already done.

On 11 May 1944, General Wladyslaw Anders issued his Order of the Day:
“Soldiers!
The moment for the battle has arrived. We have long awaited the day of revenge and retribution over our hereditary enemy. Shoulder to shoulders, will fight British, American, Canadian and New Zealand divisions, together with French, Italian and Indian troops. The task assigned to us will cover with glory the name of the Polish soldier all over the world. At this moment, the thoughts and hearts of our whole nation are with us. Trusting in the Justice of Divine Providence, we go forward with the sacred call in our hearts: God, Honour, Country”

While two British corps were to surge forwards on either side of them, and the I Canadian Corps had to cross the Liry Valley, the Poles were asked to take the Monastery Hill by frontal attack. The first Polish assault on 12 May was unsuccessful, but in the early hours of 18 May, when elements of the 78th British Division joined the Polish unit, a red and white flag was raised above the ruins. At midday, Master Caporal Emil Czech raised his bugle to sound ” St Mary’s trumpet Call” to signal the Victory. The telegram which General Wladyslaw Anders sent to his Commander-in -Chief General Sonkowsky was really clear : “….Victory due to heroism of soldiers….”

On 25 May, Polish units burst through the Gustav Line at Piedimonte San Germano.But from this point starts another story, your tour guide will tell you when you will visit us…The Poles have a special place in Cassino history. The 2nd Polish Corps numbered about 50.000 men, all of whom had a long and dangerous journey behind them, started in Syberia and ended in Europe.

Thanks to War Memories-Memorie di Guerra for the old pictures

Monte Cassino Battlefield tour for Poles: WHAT TO EXPECT

The “Monte Cassino Battlefield Tour for Poles“ (about 3 Hours) includes:

2) about 3h30 guided tour of the Polish most meaningful sites of Cassino:

Monte Cassino Battlefield tour for Poles: WHAT YOU MUST KNOW ABOUT THIS TOUR

GUIDES/LOCAL EXPERT: I will held this tour. 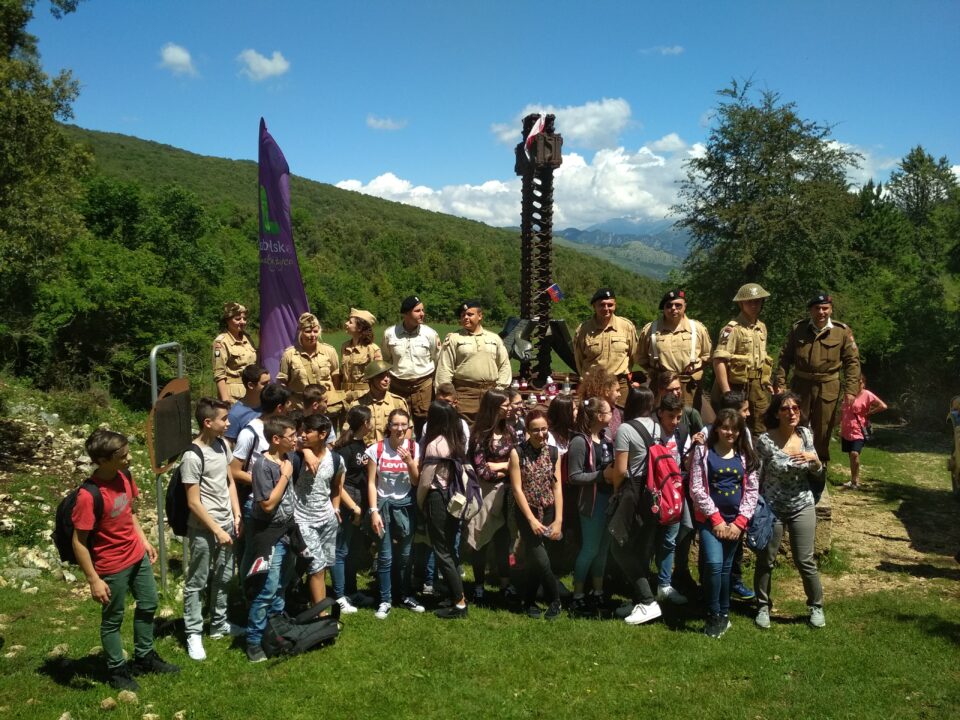