Our guided tours of the Battlefield of Monte Cassino and the Gustav Line are held every day by Anna Maria Priora a fully licensed Italian tour guide, following the footsteps of the Allied Forces and the German troops in the Italian Campaign. I began to work in the tourism branch in 2003, and after having met a lot of tourists, and having visited many old Italian monuments, I decided about 10 years ago, that I had to follow my way, and follow my passion: the Second World War in the Western front, and in particular the Italian campaign with its armies, infantries, regiments, but even the civilians with their sorrow.

Monte Cassino War Tours: how you can join my war tour from Rome or Sorrento

If you want to take part to my Monte Cassino Battlefield Tours, it is very easy. It is possible to join our Battlefield Tours from Rome, catching a bus or a train to Cassino, or from Naples or Sorrento, catching again a train or a bus to Cassino. It is very easy and it is also very cheap. If you want to know how to arrive in Cassino leaving Rome, Naples or Salerno have a look here for some suggestions, and keep an eye to the Italian National Railway online timetable or to Flexbus online timetable.

Because I speak German, English and French I read a lot of documents in their original language, to be sure to really understand the emotions of the soldiers involved in the battles, and the strategies that were planned in 1944. There are a lot of books and movies about Hitler, his invasion of Europe and the life in the occupied countries, but usually Monte Cassino and its 4 battles are less known. That’s why I wanted first of all to speak with the veterans in their own language, and to walk on their footsteps on the battlefield, to be a witness for the future.

All Monte Cassino Battlefield tours start from the Railway Station of Cassino, next to the green kiosk in the middle of the square and our groups are  formed by maximum 8 people, because it is the best way to have a more effective experience. But if you need a different pick up from your B&B or your Hotel, please let me know! We will visit the Battlefields on a little van, that will allow us to join also very narrow roads and hidden places . Usually I held my tours in English, but if you need a different language, we will find a solution. I can speak French, Spanish, English, German and naturally Italian.

During the Week of the WWII celebrations  all the ceremonies that are taking place in that day are included in my tours. It is difficult to know in advance the calendar of the different ceremonies, but I will try to let you know all what I know as soon as possible.

Calendar of the WWII ceremonies of Monte Cassino 2023

80th Anniversary Calendar of the WWII ceremonies of Monte Cassino 2024 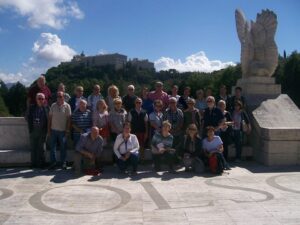