Sometime I meet Canadians following the footsteps of their Granfathers, or fathers here in Cassino region. They are usually surprised to know that the Canadians with the help of the Indians were the first to force the Gustav Line on the Rapido River. They usually ask me to have a guided tour of the Canadian battlefields of Montecassino, to know everything happened here, and to see the place in which the attack took place. But do you know that to prepare this successfull attack it was very important to organise a training for Canadians and Indians together? let’s talk about it.

Monte Cassino Battlefield tours for Canadians: a great friendship with the Indians

At the end of March 1944 the 1st Canadian Armoured Brigade  had been relieved with 8th Indian Division in the Adriatic sector and moved fist of all into a training area south-east of Venafro to work in cloose cooperation with the 13rd Corps and to attend  an intensive course of training in preparation to a coming operation against the Gustav and Hitler Line. The original intention had been for the Canadians to support the 4th British Brigade in the coming operations, but because of the great friendship and admiration which had been built up between Canadians and Indians, the plan  was changed  and the Brigade was informed that  it would be sopporting the Indians.

However because of the 8th Indians Division could arrive in this area not before the 20th April, the Canadians continued their training with the 78 Division and the 4th British Division, that had to be employed  in a similar operation in an other sector on the Cassino front. It is very interesting to read why it was so important for infantry and tans to train together. First  af all infantry had to familiarize with the characteristics of the tanks and the tactics, but it was also important to practise the various methods of intercommunications between tanks and infantry, and the first thing to do was to create a friendship between the men

The Canadians learnt the importance of communications

During this traning periode a considerable amount of time was used to improve communications, and so each tank was fitted with an outside telephone held in a clip welded to the skirting plate. This was a great solution but its disadvantages for target identification were that the infantryman had to expose himself to much  to reach the phone, and usually he could not see  the target while attending to describe it to the telephone. an other advice to be adopted was the installing of a No 38 set in 2 tanks of each troop to permit intercommunication between tank troop and infantry platoon.

The importance of languages during Monte Cassino Battlefield

An No 18 set was fitted on one tank of each squadron to permit to the infantry battalion commander to keep in touch with its squadron dcommander. They  also planed to use other methods to let the men know the target theu must fire, but the most satisfactory were tracer bullets fired from the rifle and pointing with the rifle in the direction of the target. But the biggest problem they had was that the Indian Battalion had not English speakers at platoon level and wireless communication had to be mainly on a company and troops level.

Monte Cassino Battlefield tours for Canadians: ready for the battles

The training with the 8th Division began on 23rd April and continued untill all units of 17 and 18 Infantry Division had completed the course on 8 May. All the accounts of this periode writen by veterans spoke with entusiasm of this period of training. It means that one of the goals of this project had been reached.
Book a guided tour of the Canadian Battlefields with us…. it will be an emotional experience!

Monte Cassino Battlefield tours for Canadians: WHAT TO EXPECT

The “Cassino Battlefield tours for Canadians” (about 3 hours) includes:

1)pick up from your arrival at the railway station in Cassino every day at 10.00am or 02.00pm (Main Square, near the Green Kiosk)

2) about 3h30 guided tour of the Canadian most meaningful sites of Cassino:

Monte Cassino Battlefield tours for Canadians: WHAT YOU MUST KNOW ABOUT THIS TOUR 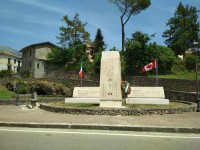