In the evening of 11 May, long columns of French troops and mules moved along the trails and road to the Mount Fuga bridgehead. The French General Juin on the roof of the castle of Sessa Aurunca was nervous: his men had the task to break the Gustav Line, but he knew how difficult the Gustav Line Battlefield would be.

At 23.00, the guns roared and the soldiers sang the Marseillaise or c’est nous les Africains and those who were Muslim sang la Allah ihl Allah. During that night, over 1000 guns roared from Cassino to the sea. General Juin had planned the conquest in four points:

2)blocking the Ausonia road to enlarge the allied bridgehead

4) reaching Pico and be ready to join Frosinone and then Rome.

He knew it was important to establish in advance who must do every singular attack. He decided that at H hour, only two Division had to attack.

On the right side the 2nd Moroccan Division of General Doddy must seize Mounts Faito and Garofallo, then Feuci and Agrifoglio and finaly Mount Maio while the 4th Mountain Division of General Sevez on the left had to protect the 2d, moving on the slope of Mount Faito and the area of Castelforte. General Juin had planned to do all this during the first night, but he was afraid that the rocky battlefield on the Aurunci mountains could be too difficult for his men. Finaly the 3rd Algerian Infantry Division of General De Monsabert had to attack Castelforte area, on the right side of the American 5th Division.

The 2d Moroccan Division made the first attack under Major General Dody.

The 8th Moroccan Infantry moved toward mount Ornito and Faito, while on the right the 4th Moroccan Infantry had to join the slope of Mount Cerasola and Garofano. The 5th remained in reserve very next to the battlefield. At 23.00 11th May the artillery opened the fire on the German positions on Mount Faito, Feuci and Garofano at 03.00 the summit of the hill was totally in French hands, even if during the following hours some enemy fire continued from the reverse slopes.

Also, the 4th Moroccan Infantry gained the slopes of Cerasola Hill, but at about 00.15 the 1st Battalion was under heavy enemy’s fire, and the morning after the 5th Moroccan Infantry joined it to compensate its heavy losses on the battlefield. The 4th had lost 11 officers and 450 men in only one day of fighting. They reorganized themselves and at 03.00 on 13th May the 4th and 5th Moroccan Infantry attacked together, and they joined Mount Garofalo.

On the left side also the 8th Moroccan Infantry met a strong counterattack against Mount Faito, and General Juin was afraid that his troops could be destroyed, but at the end at 15.15 on 12th May the German retired. Juin wanted to continue the attack, but the soldiers waited until 08.00 on 13th May. And the day after Mount Feuci was conquered and the way to Mount Majo was opened.

On the left side of the FEC, Major General Francois Sevez with the 4th Mountain Division was waiting to start his attack. The 6th and the 2th Moroccan Infantry was entrusted to destroy the enemies in the gorge of Riva Grande, while the village of Castelforte was assigned to the 4th Tunesian Infantry. At H Hour the 6th Moroccan Infantry passed between mount Fuga and Mount Turlito, and waited first that the 8th Moroccan Infantry could do further progress toward Mount Feuci. While the 3rd Battalion crossed the Lion Bridge, the 2nd Battalion joined the Damiano ridge, but the most important activity in this area was still at Castelforte.

In the early afternoon the 4th Tunesian Infantry had almost reached the village, with the 3rd Algerian Infantry Division of General Monsabert and joined it from 3 different directions. The French could be relatively safe because the 88th Division had already reached Ventosa and occupied Mount Cianelli. The Germans organised several counterattacks, until when the radio told them that their situation was desperate, and Santi Cosma e Damiano and Castelforte were firmly in Allied hands.

End of the battle on the Garigliano Battlefield

By the Evening of 14th May the French had enlarged a loto the Garigliano bridgehead, and was ready to arrack San Giorgio a Liri, and Esperia. But the battlefield was covered by dead and wounded. Two very brave groups of the 4th Moroccan Infantry had been surprised during the assault to the top of mount Cerasola , and had been charred by the German flamethrowers.

The French Expeditionary Corps Battlefield Tour (FEC): WHAT TO EXPECT

1) pickup from your arrival at the railway station in Cassino every day at 10.00am (Main Square, near the Green Kiosk)

2) about 4 guided tour of the French most meaningful sites of the Castelforte and Santi Cosma e Damiano sector of the Gustav Line (along the Garigliano River):

3) return to the railway station in Cassino at about05.30pm

The French Expeditionary Corps Battlefield Tour (FEC): WHAT YOU MUST KNOW ABOUT THIS TOUR

WHEN AND WHERE: Cassino railway station, every day at 10.00am (Main Square, near the Green Kiosk)

WHAT IS NOT INCLUDED: Lunch and dinner are not included, but we can suggest..

GUIDES/LOCAL EXPERTS: I will held the tour with the help of Damiano Ianniello, a local historian.

Monte Cassino Battlefield Tour on the footstep of French Soldiers ⭐⭐⭐⭐⭐ 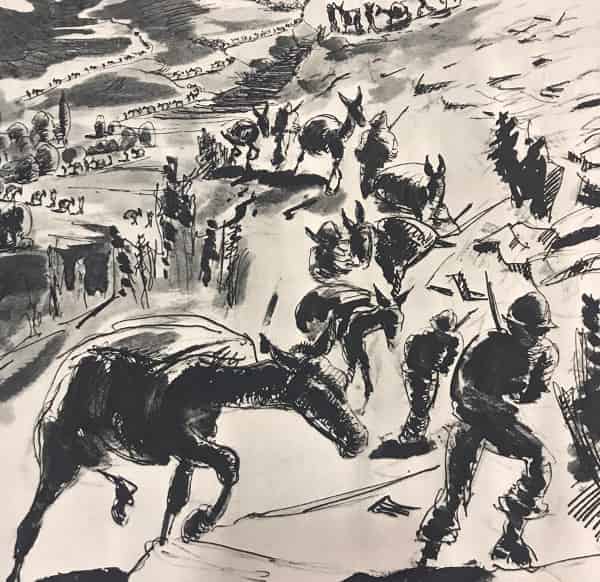