On 3rd September the Allied after having invaded Sicily, were on the Italian mainland. The Italian were quite ready to make peace with the Allied and they were ready to re-enter the war this time on the Allied side. After having invaded the south of Italy on 9th September the Allied landed in Salerno and it was planned to send the 5th Army toward Rome. At the beginning the troops involved were Canadians, Americans, British and French, but  during the long way to Rome, the Allied  faced a very difficult defence in an area called Mignano Gap. Mark Clark The American General in charge of the 5th Army divided the attack to the Winter Line in three actions.

First on La Defensa massive, then on Monte Lungo hills and then at San Pietro Infine and Mount Sammucro. It seamed that the days of the battle could not finish and the men lost on the battlefields were so many. The troops were sent further more. They had to conquer San Vittore, Mount la Chiaia and then Colle Cedro, Porchio hill, and at the end, ready to attack the Germans on Trocchio hill, they discovered the Germans were already retreating. In front of the 5th Army there was the so called “Liri Valley”, the town of Cassino and the Abbey of Monte Cassino, but even more important the Gustav Line. And the 4 Battles of Monte Cassino could start!

While the “C” and “B” Squadron where having slowly slowly success the 14th Canadian Armoured Regiment (The Calgary Regiment) had done much to relieve the pressure on their infantry brigade. On 12 May 1944 a Canadian Captain called Hugh Antony Gualt Kingsmill developed a new experimental bailey bridge.He was a captain of the 1st Light Aid Detachment attached to 14th Canadian Armoured Division, working in conjunction with a Royal Engineer officer from 8th Indian Division.

Captain Kingsmill had the great idea of building very quickly the Plymouth Bridge in a very unusual way. He constructed a bailey bridge well back from the river bank and carried it forward on two specially fitted sherman tanks, the first tank having the turret removed and being fitted with rollers to alow the free forward and backward movementn of the bridge. The secondn one was fitted with a bracket which supported the hind end od the bridge. The two tanks moved forward together, the front tank driving into the water while the second tank continuing to move forward, would slide the bridge forward untill it came to rewst on the far bank. The second tank would then disengage and the bridge would be ready to be used.

Many experiment had already been done on the Volturno river, and they were all successful, but in this case the operation was very unluky. First the mist and smoke delayed the bringing of the briedging supplies, and then when the bridge and the two tanks were finaly ready, the first tank with the first part of the bridge bogged down in the soft ground. Working under continual heavy fire in totaly adverse conditions it took a while to put the bridge in the right position.

By 9.50 a.m., covered by smoke and high esplosive fire the bridge was put in the right position the enemy were holding position only 250 yards from the bridging site and under such circumstances no other type of tank-bearing bridge could have been launched over a gap of 57 feet. Because of he contributed directly in the smashing of the Gustav Line, he was awarded with the Military Cross, the third most important award after the Victoria Cross for British or Commonweath officers.

Countdown to Cassino Battlefield Tour: WHAT TO EXPECT

The “Countdown to Cassino” tour (about 6 hours) includes:

1) pickup from your arrival at the railway station in Cassino every day at 10.00am  (Main Square, near the Green Kiosk)

2) about 6h30 guided tour of the Canadian most meaningful sites of Cassino:

3) return to the railway station in Cassino at 05.30pm

Countdown to Cassino Battlefield Tour: WHAY YOU MUST KNOW ABOUT THE TOUR

WHERE AND WHEN: at the railway station in Cassino every day at 10.00am (Main Square, near the Green Kiosk)

GUIDES/LOCAL EXPERTS: I will half this tour.

Countdown to Cassino Battlefield Tour: MORE TOURS IN THIS AREA 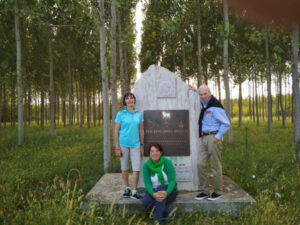