Monte Cassino Battlefield Tour for French: the French are successful in Cardito Area

After had been successful in the first French-German encounter on the Italian front near Scapoli, the French were successful on Mount Pantano, on the Cerasuolo flat, Monna Casale. By the 21st December, the troops of the VI Corps were running to Viticuso and Casale. General Mark Clark asked to the French General Juin to attack a very difficult area on the Gustav line, on the right side of Cairo massive. This Monte Cassino Battlefield was clearly the most difficult of the area

Monte Cassino Battlefield Tour for French: It Is time to attack the Colle Belvedere

General Clark had little faith in the French army. The major assault on the Gustav Line should be by British X Corps across the Garigliano River and by US II Corps across the Rapido River near Cassino. General Clark asked the French Expedition Corps to plan an attack on the mountain east of Monte Cassino, called Colle Belvedere. It wasn’t an simple task. Colle Belvedere was 800 feet high and was fortified with bunkers and mines, and defended by units of the German 44th and 71st Infantry Division.  The Rapido river should have to be crossed merely to reach the position. Yet General Juin knew he could not refuse Clark’s request if the Allies were to take the FEC seriously.

It was, Juin noted, one of the least accessible parts of the Gustav Line, backed by the enormous peak of Monte Cairo. The initial advance to this battlefield would involve crossing the Secco River and the Rapido River, then braking through the defences in the valley, before climbing over 800 metres over bare rock, under direct observation by German Artillery spotters on Monte Cifalco. having the FEC on Colle Belvedere was essential to the safety of the American Red Bulls Juin’s Tunisians from the 3rd Algerian Division was chosen to lead the attack. On 25 January, Commandant Gandoet was ready. The aim was to capture Hill 470, then push on along the north side of Belvedere.

The French must keep the so called Ravin Gondoet

A raven had been chosen and was called Ravin Gandoet because it seemed to offer cover from artillery fire and the possibility of surprising the defenders on the objective. It was a bloody battle. On 31st January, not only Colle Belvedere but also Colle Abate was captured. The two French Divisions were now amongst the defences of the Gustav Line, and Juin felt that introducing one more division into the battle would allow them to break through. Clark was not convicted, however, and he was loath to transfer any American unit to the French sector.

Juin wrote in his diary: ‘we saw them coming back, haggard, unshaven, their uniform in rags and soaked with mud, the glorious survivors of the regiment’. They were glorious, but few of the assaulting companies only 30 percent had returned unscathed.

All the old pictures on this Page were taken from here

Monte Cassino Battlefield Tour for French: WHAT YO EXPECT

The “Monte Cassino Battlefield Tours for French”  (about 3 hours) includes:

2) about 3h30 guided tour of the French most meaningful sites of Cassino:

Monte Cassino Battlefield Tour for French: WHAT YOU MUST KNOW ABOUT THIS TOUR

WHEN AND WHERE: At the railway station in Cassino every day at 10.00am or 02.00pm (Main Square, near the Green Kiosk) WHAT IS INCLUDED: Minivan and ww2 tour guide 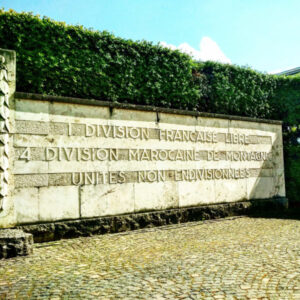