Coming from Foggia, Montgomery wanted to stop the Highway 17, linking the Adriatic port of Termoli with Naples. He asked General Demsey to advance norther following two directions: the 78th Infantry Division along the main coast road toward Termoli, and the 1st Canadian Division toward Campobasso and Vinchiaturo. Naturally the last option was the most difficult, because the roads were a little more than a path and the Canadians had in front of them mountains and the Fortore River.

On 29 September the Allied sent first an advanced guard formed by the Calgary Regiment, the 4th Princess Louise Dragon Gards and the Royal Canadian Regiment. The divisional start line was Lucera, but the first resistance was in Motta and Montecorvino. Here, the help of Popski’s Private Army and the bravery of the Canadian forces obliged the Germans to withdraw. The same happened also in the following villages until the Fortore River.

On the other side of the Fortore river the Canadians could see the village of Gambatesa. The Highway 17 was interrupted by the Germans that had demolished the ‘bridge of the 13 Arches’ The first attempt to seize a bridgehead across the Fortore river by the Canadians happened in the night of 5-6 October, but it was unsuccessful. Only on 7 October the Allied could destroy the German resistance and cross the river.

On 11 October they decided that the I Brigade had to capture Campobasso passing through Jelsi. After Jelsi they divided the forces in two: the first group following the Highway , the second just running on the surrounding hills toward Vinchiaturo. The 48th Highlander on the 11th advanced toward Campobasso, but the Germans tried to delay them. At the end at 5.30 on 12nd October the Royal Canadian Regiment entered bloodless the town of Campobasso, even if the Germans reported to their high Command ‘a hard battle’.

The Canadians passed about eleven days in this Town, and they started for this reason to call it “Canada Town”. In the meantime, the other group formed by the II Brigade reached the Vinchiaturo area and could cut Highway 17 north of Vinchiaturo. The task Montgomery gave to the First Canadian Division, was completed. Our tour will follow the Canadians from the Fortore River to Campobasso, visiting places that are important to understand the different assaults, but also the town centre with the transformation made by the Canadians of the major roads, the bars and shops

Campobasso or Canada Town” Battlefield Tour: WHAT TO EXPECT

The “Campobasso or Canada Town tour” (about 5 hours) includes:

2) about 5h guided tour of the Canadian most meaningful sites of Campobasso and Fortore river area:

3) return to the railway station in Campobasso

Campobasso or Canada Town” Battlefield Tour: EVERYTHING YOU MUST KNOW ABOUT THIS TOUR

WHEN AND WHERE: At the railway station in Campobasso every day at 10.00am or 02.00pm (Main entrance)

GUIDES/LOCAL EXPERTS:  I will held this tour with Patrizia Curci, local historian and WW2 tour guide.

“Campobasso or Canada Town” Battlefield Tour:MORE TOURS IN THIS AREA 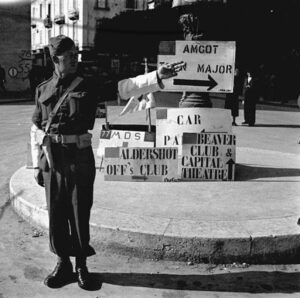