During the II battle of Cassino with the arrival of the Kiwi forces, also other strange fashioned soldiers arrived in the Liri Valley. They were the Indians, sent by Churchill to help the British troops. The 20% of them were Sikh, coming from the norther areas of the country and wearing their turbans instead of the British Helmets.

They arrived to Cassino first on February 1944 and it was easy to recognise them, from their insignia, reppresenting a Red Eagle. Speaking about the British troops is not possible without speaking about the Red Eagles, because they had British officers, and they were organized in division, and every division had a brigade formed by British soldiers. So the Kiwi and the Indian parts of Monte Cassino History are closely related with the British.

That’s why with the Rajputane, the Punjabe and the Gurkha soldiers we remember also the actions of several UK battalions, like the Royal Sussex, the Cameron Highlanders and the Esses. The General that was in charge of all of them was Fryberg. During the second battle of Monte Cassino Freyberg asked to the soldiers of the Royal Sussex to join the Snake’s Head Ridge and point 593, to take over the 34th Division exhausted after days of bloody fighting.

The British on Castle Hill

Only a few days after the takeover in the Abbey area, Tuker had to leave the battlefields to join the hospital in Caserta and Demoline became the temporary General in charge. After the Bombing of the Abbey, Freyberg believed that the best way to join the Abbey was attacking Castle hill and resist there 9 days long with some soldiers of the Essex Reggiment. After many days of fighting without being victorious, on 23rd March Freyberg asked to the 4th Indian Division to retreat.

The 78th Division crossing the Rapido River on the Amazon Bridge

Some weeks later during the last Battle of Monte Cassino, Uk General Oliver Leese asked to the 78th Division to attach the Liri Valley and to cross the Rapido River. It was difficult for the soldiers to cross it again, and the 78th was successful only in the night between the 14th and the 15th May. But their biggest successo was the crossing of the River by Building a Bailey bridge called Amazon Bridge in the early morning of the 12th May

Monte Cassino Battlefield tour for UK visitors: WHAT TO EXPECT

The “Monte Cassino Battlefield tour for British” (about 3 hours) includes:

2) about 3h30 guided tour of the British most meaningful sites of Cassino:

Monte Cassino Battlefield tour for UK visitors: WHAT YOU MUST KNOW ABOUT THIS TOUR

GUIDES/LOCAL EXPERTS:  I will held this tour 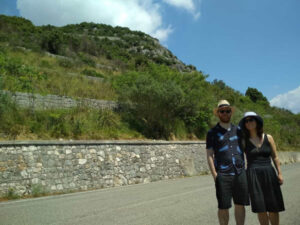