After having seen how difficult it had been the British attack on Castelforte and the Minturno area and after having loose so many lives on the Rapido River in the middle of the Liri Valley, Mark Clark asked to the II Corps of General Keyes to send the 34th Red Bulls Division at the orders of Charles Ryder to cross the Rapido River norther than Cassino. The plan he had, was to ask to the 133rd Regiment to attack and occupy the tyny village of Caira, what at the time was a group of barracks and then to climb the hills behind these barracks.

On the left side of the 133rd, the 135th had to cross the Rapido too, but in this case the goal was to attack Monte Cassino from this side. Naturally the poor American soldiers didn’t know that the Germans had already dug pillboxes and foxholes, they had already prepared barbed wire lines and minefields to delay the Allies.

On 24th January they reached the barracks but the German fire pushed them back the night after, thanks to the help of the 100th Battalion, a group of American-Japanese, the so called Nisei. They fought like lions and on 26th January they discovered that the battalion formed by 187 men, after 24 hours, had only 28 of them left. The Red Bulls organised with the help of the tank battalion several attacks, but the mud was so difficult for tanks and heavy guns, but they had to wait until the 1st February when also the 142nd Regiment of the 36th Division came to help, the 34th reached point 593 but only for few hours.

Even if the Times continued to write an article about the lucky attacks and how weak were now the German defences around Cassino, the Germans had ask to their regiments all over Europe to reach Cassino and join them. At the end on February General Mark Clarck and General Keyes had to decide to retreat the 34th and the 36th. In a few days of fighting the 34th Red Bulls Division lost 1/3 of its forces: 318 deaths, 1641 wounded, 392 lost.

34th Red Bull Division Battlefield Tour: EVERYTHING YOU MUST KNOW ABOUT THE TOUR

WHEN AND WHERE : At the railway station in Cassino every day at 10.00am or 02.00pm (Main Square, near the Green Kiosk)

Battlefield tour on the footsteps of 36th Texas Division⭐⭐⭐⭐⭐ 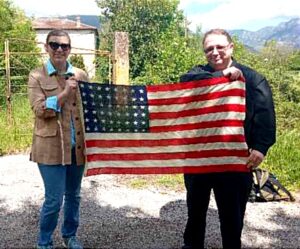