In sommer 1940 War started again in Europe. Presidente Roosevelt mobilized as a precaution the National Guard for a year of training. War came to America when Japan attacked Pearl Harbour on Su day December 7 1941. Some weeks after the attack the first American soldiers joined Europe ready to liberate it.

The US Army’s 36th Division variously known as the Texas Division, or the T-Patchers, for the distinctive T insigna sewn on the upper arm of their uniform, had started its long adventure in Italy marching in a holiday parade in Rabat with the Marroccan Sultan’s Gard, and a long line of tanks and trucks. The commander of the 36th was General Fred Livingood Walker, and while he was marching in the same parade, he already knew that the 36th would be joining Mark Clark for the next Allied action against the Axis in Italy. In the same days Patton and the VII Army had invaded Sicily and Clark needed the T-Patchers for the following Italian Campain.

At the end of 1943 the 34th was part of General Mark Clark’s 5th Army. The men arrived at Salerno and advanced slowly thought mountains and rivers, with orribile weather, capturing many villages and towns. Fighting along the Italian peninsula was not Easy but slowly slowly the Germans were pushed back in the direction of the famous Gustav Line. The objectives along the Highway 6 were taken: first of all Monte Pantano, then the Village of San Vittore del Lazio, then the two Hills called Monte Chiaia and Monte Trocchio. (Read here to know something more about these actions)

When the 36th and the 34th Divisions arrived at Mount Trocchio, the men had in front of them the Liri Valley and Cassino, but the most impressive and dangerous point to be taken was monte Cassino Abbey on the top of the Hill. While the 36th Division was sent to cross the Rapido River and the Valley, the 34th Division had Aldo ti cross the River to join their goal: Monte Cassino Abbey. They tried to storno the ancient Abbey but the Germans defended It bravely, while the 36th Lost many men in crossing the Bloody River.

To break the Gustav line the Allied needed to sento to fight about 20 Division and they drive the Germans out only about 4 mounths later. Between the last few months of 1943 and the half of Febbruary 1944 the 34th Division Lost thousand of lives. Then the American army gave them some rest and in March the men were sent into actions to Anzio.

Monte Cassino Battlefield tours for Americans: WHAT TO EXPECT

The “Monte Cassino Battlefields tours for Americans” (about 3 hours) includes:

Monte Cassino Battlefield tours for Americans: WHEN AND WHERE

WHAT IS INCLUDED: Minivan and ww2 tour guide.

MORE TOURS IN THIS AREA: 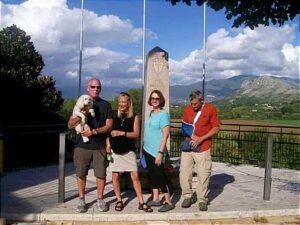