Mount Trocchio The German Barrier: WHAT TO EXPECT

Studing the Four Battles of Montecassino, to be sure to deeply understand the different attacks, I visited with new eyes all the places I had seen for years. And the first place I reached was the top of Monte Trocchio. Let’s remember what happened here 76 years ago.

On 9th January the battlefield moved to the slopes of Mount Trocchio, where the battle started on 10th January. The 168th Infantry Regiment 34th Red Bull Division started its attack from a small hill called il Gallo and the surrounding ridges, but only on 11th January it was able to attack Cervaro, this little montain town trasformed in a mass of rubbles. The 71st Panzer Grenadier Regiment  reinforced  in the nicht of 10/11 by soldiers of the Hermann Goering Panzer Division, was very well protected in the stone houses and cellars of Cervaro town centre.Cervaro was taken on 12th January but there was no collapse of enemy resistance, and the Germans  retreated.

Mount Trocchio, the German Barrier of the Hermann Göring Division

The 168th reached Le Pastenelle and the Rapido plain. The other regiments of the 34th Division helped the 168th and on 13th January was ready to help to attack the Trocchio hill. The 135th reached point 189, between Cervaro and Trocchio hill, along Highway No.6, where the 2nd Hermann Goering Regiment had some dangerous pillboxes.

When the Germans were reached by the 168th on one side and the 34th on the other, they retreated. The Allied forces organized the attack: the 34th had to attack the norther flank of Mount Trocchio, the 168th from Le Pastenelle on the Highway no.6 side, and the 141st  Infantry 36th Texas Division from the south. But the Germans were already far away, and the Allied joined one of the best observation point they could have for the next 3 months: Trocchio hill and its castle were perfect to see everything on the Liri Valley.

Thanks to Alessandro Pistilli and Giuseppe Giovini for the modern pictures of Trocchio hill and Thanks to the Facebook page called War Memories-Memorie di Guerra, for the old ones.

Mount Trocchio the German Barrier: ALL YOU MUST KNOW

The “Mount Trocchio the German Barrier” can be visited every day all around the year.

There are parking facilities all around this area

The “The Mount Trocchio the German Barrier” tour (about 3 hours) includes:

Mount Trocchio the German Barrier: WHAT ELSE YOU CAN’T MISS IN THIS AREA 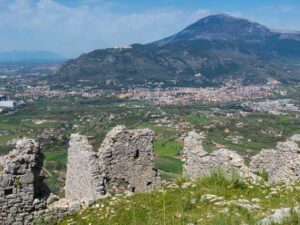