As Mark Zuelcke remembers in his Book The Liri Valley: Canada’s World War II Breakthrough to Rome on July 1943 about 26.000 Canadians landed in Sicily. When on September the Allied invaded Italy, the Canadians were involved with the 8th Army in the battle of the Moro River, Villa Rogatti, San Leonardo, Casa Berardi, Cider Crossroads and Ortona against the 90th Panzer Grenadier and the 1st Parachute Division. Due to all the difficulties the 5th Army have had  on the Winter Line, General Harold Alexander decided to concentrate all the Allied’s efforts on the Gustav line from Monte Cassino to Minturno.

Operation Diadem started on May 11, 1944 and the 1st Canadian Corps played a great role in determining the success of this operation. When on April 18, 1944 the 1st Canadian Corps stopped all radio traffic, trying to keep the secret on the Place they were. The German 10th Army could not detect them and could not understand what was going to happen. The Radio traffic started again next to Salerno, letting the Germans thinking that the Canadians were preparing an amphibious operation in this area.

“Canadians in Cassino” Battlefield Tour: on the Gustav Line for the last battle

During the last battle of Monte Cassino, the role of the 1st Cab was to assist the 8th Indian division in crossing the Gari River. The 17th Brigade and Ontario Tanks would support the crossing with direct fire. At 06.00pm on May 11, Sir Oliver Leese sent a message to all 8th Army regiments wishing good lucke to all the troops. The attack was ready! During the night starting at 11pm the troops had to establish a bridgehead, to expand it and clear an extensive area around Sant’Angelo.

“Canadians in Cassino” Battlefield Tour: the Canadian bridges on the Rapido River

But at about 03.00am, the Calgary Regiment had to abandon the building of its Cardiff bridge to help the 8th Indian Division to build the Oxford Bridge. Captain Anthony Kingsmill was already choosing the best place to build another bridge the Plymouth… at 9.50, having a lot of difficulties, but he had an excellent idea and he found a solution to all the problems. On May 13 the soldiers buildt the fourth bridge called London Bridge. The Canadian tank regiments could cross the Gari River and run norther to Rome!

“Canadians in Cassino” Battlefield Tour: WHAT TO EXPECT

The “Monte Cassino and Cassino Battlefield tours for Canadians” (about 3 hours) includes:

2) about 3h30 guided tour of the Canadian most meaningful sites of Cassino:

“Canadians in Cassino” Battlefield Tour: WHAT YOU MUST KNOW ABOUT THIS TOUR

PRICE PER PERSON 80 euros (lunch or dinner not included)

“Canadians in Cassino” Battlefield Tour:MORE TOURS IN THIS AREA 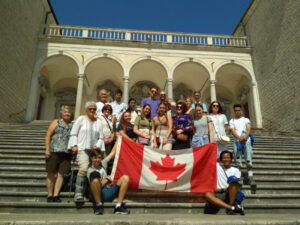