On 15 May the First Canadian Corps was ordered to move on the left side 9f the 13th to relieve the Indians at sunrise on 16th May and to advance untill the Hitler Line The tired Indian troops were covered by the darkness when the First Canadian Infantry Brigade arrived at Pignataro. In the morning of 17th May the 3rd and the 1st Brigade attacked the Cassino-Pignataro road and after a long day of resistance by the nightfall the troops were not far from le Forme d’Aquino.

Crossing the Hitler line: the first obstacle in Forme d’Aquino

Forme D’Aquino was and still is, a deep and transverse gully that runs in the area between the Gari (known by the Allies as the Rapido river) and the Melfa River, and it was a big obstacle for tanks. Because of on the left and on the right flanks, the French troops and the Polish soldiers were totally successful the First Parachute Division retreat along the highway No 6. On the 18th the 1st and the 3rd Canadian Infantry Brigades advanced without troubles. The soldiers were wery surprised not to find a strong resistance in the gully, and by the afternoon they were about 1 miles before the Aquino-Pontecorvo Road.

The Allies discovered too late that the enemy was ready to stop them again on the Hitler Line (have a look to how the German built this defensive line here). On the 19th soldiers of the 78th British Division supported by the Ontario Regiment tanks, tried a quick attack to the village of Aquino thinking that the defence forces could be disorganised. But the Germans were ready, and fired and destroyed 13 Ontario’s tanks, and hill all the others. On 20th May General Burns ordered to prepare in the next 3 days the breaking of the Hitler Line and the cleaning of Ceprano.

To soften the strongpoint and help the Allied soldiers, for 72 hours 400 guns fired all the known defensive positions, while very brave Canadian patrols tried to go d the best tank routes and took prisoners. From one of the prisoners the Canadian Intelligence learnt that in this area were concentrated the 90th Panzer Grenadier Division. On the left side the Princess Louise Dragoon Guards and the 1st Brigade and 48th Highlanders met strong resistense.

At 5 o’clock on 23 May 800 guns started to fire the German lines and one hour later the soldiers crossed the start line.The 2nd and 3rd Canadian Infantry Brigades moved toward fields and wires.But the main attack was upon the 2nd Brigade on the right side. By midhmorning the Seaforth Highlanders of Canada joined at all costs the Aquino-Pontecorvo Road, and on the right Princess Patricia’s Canadian Light Infantry was under a terrible storm of fire.

The battle was more favourable to the 3rd Brigade on the left side. After one hour from the beginning of the assault the Carleton and York Regiment had opened a way for the 51st Royal Tank Regiment and was soon joined by the West nova Scotia Regiment. General Vokes decided to reinforce the 3rd Brigade with two squadrons of the Three Rivers Regiment and the Royal 22nd Regiment. Meanwhile the first Brigade and the Princess Louise cleaned Pontecorvo, but Aquino was still in German hands

The First Canadian Division loose 51 officers and 838 men, but the heaviest losses had fallen upon the 2nd Brigade that was reduced to 150 men. The 25th Tank Brigade lost 60 tanks and 41 of them were the famous Churchill Tanks of the North Irish Horses. The Allied took 700 prisoners and many hundred Germans were killed

Hitler Line assault
battlefield tour for Canadians: WHAT TO EXPECT

2) about 3h00 guided tour of the Canadian most meaningful sites of the Hitler Line:

Hitler Line assault or “Operation Chesterfield” battlefield tour for Canadians: WHAT YOU MUST KNOW ABOUT THE TOUR

WHEN AND WHERE : At the railway station in Cassino every day at 10.00am or 02.00pm (Main Square, near the Green Kiosk)

WHAT IS NOT INCLUDED: Lunch and dinner are not included. 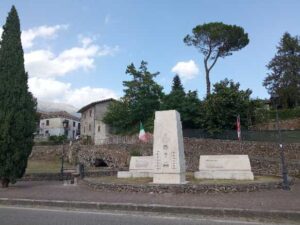