The Winterline Museum in Venafro: WHAT TO EXPECT

If you are looking for a little but great museum full of memorabilia regarding the French, the Canadian and the American armies on one side, and the Italian and German armies on the other side, you must visit Venafro and its Winterline museum. The collection started many years ago, when Luciano Bucci, one owner of this Museum, was only 12, and was interested in old things, then he met Renato Dolcigno and Donato Pasquale and they rented a flat in the historical centre of Venafro to show people what they had been preserving for so many years.

Winterline Museum: a great collection of WWII memorabile in the Winter Line area

He saved things that people threw away; they asked people for the old uniforms and shoes forgotten by the soldiers in the surrounding country houses, the old corned beef cans and toothpastes lost during the battles, and shells of every kind.Luciano told me when I was visiting his museum, that one day, when he was very young he saw an old bicycle used by the soldiers during WW forgotten along the street, he stopped there, took it, he tied the bicycle strictly on the top of his father’s car, and went home.

He was so happy for what he found he noticed too late, that the old rusty bicycle had totally scrapped the paint of the car. He and his friends continued during the last 20 years to look for bullets and shells on the slope of Monte Marrone, or Monnacasale and they reached the battlefields of all the different armies to understand deeply all the decisions that where taken, and all the reasons they were taken.Then they opened in March 2008 their museum, they organized it in several little tableau vivant.

Winterline Museum: all about the FEC and the FSSF on the Winter Line

If you decide to visit with me this little but fantastic museum on the Winter Line, you will see the German defences on the top of the Mainarde mountains, the life of the soldiers under their tents, even how the first aid corner worked, or how the Special Forces met locals. The museum is not only a collection of weapons, shells and uniforms, but it is a description of the sad life of the soldiers on both sides, depicting them as victims of the war.

You can’t miss the visit of this museum that can be done with me, your professional tour guide in German, English, Spanish and French… and I will tell you the sweet stories of the Italian mules and the Polish bear…

The Winterline Museum in Venafro: ALL YOU MUST KNOW

The “Winterline Museum in Venafro” can be visited every weekend all around the year.

It must be booked in advance.

Sorry but whellchairs can not be usef

There are parking facilities at 3 minutes walk from the museum

The Winterline Museum in Venafro: MY TOURS

2) about 1,5 hours guided tour of the museum

The Winterline Museum in Venafro: WHAT ELSE YOU CAN’T MISS IN THIS AREA 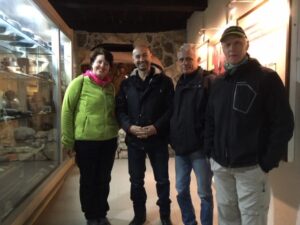