Monte Cassino Battlefield Tour for Germans: the Germans point of view in Italy

Hitler judged the fall of his friend Mussolini as the first step toward the Italian capitulation, and he was right. After some months Italy passed on the Allied side, and the Allies landed first in Sicily, then in Italy. The man who was in charge to stop the Allies was Albert Kesselring. He knew that a defensive position could not be held for a long time against an enemy with a numerical and material superiority as that of the Allies. So he created some defensive lines in areas that could help his soldiers to resist. He wanted to hold up Alexander’s advance for a prolonged period in the south of Italy.

Monte Cassino Battlefield Tour for Germans: the importance of the Gustav Line

And he had a lot of confidence in particular in the Gustav Line, a special defensive line following the courses of the rivers Garigliano, Gari and Rapido, then over the Abruzzi mountains to Castel di Sangro and the Adriatic coast. But the kernel of all this was the six-miles wide Liri Valley with his two pivots Monte Cassino on one side and Monte Maio in the other. In front of the Gustav line was the Reinhard Line, called by the Allies “Winter Line“, based on the Mignano Gap, Monte Camino and Monte Sammucro.

Monte Cassino Battlefield Tour for Germans: the Building of the Gustav Line

During autumn the Todt Organization with the help of Italian labour battalions, created a strong network of modern defensive localities. Villages were transformed into massive strongpoints, caverns were carved in the mountainsides, mine-fields were prepared along the Rapido and the Garigliano rivers, and the rivers themselves over-flooded.

Monte Cassino Battlefield Tour for Germans: the Germans divisions on the Gustav Line

On the Winter Line, built only to delay the arrival of the Allies on the Gustav Line, two divisions covered themselves with glory. They were the 29 Panzer Grenadier Divisions and the 26th Panzer Division. After losing Monte Lungo and Monte Sammucro ,General Von Senger retreated on the Gustav Line. On the mountains, the 5th Mountain Division under the command of General Ringel was controlling the Colli-Atina road and had to face the French Expeditionary Corps. The 29th Panzer Grenadiers Division with the help of the Hermann Goering Division had to withdraw on San Vittore and Mount Porchio, while the Hoch und Deutschmeister come back to help on the same line.

Werner Eichler was a member of 3.Kompanie of Fallschirm-Panzerjäger-Abteilung.1.Werner was captured at the Hotel Continental in Cassino town on 18 May 1944. He was wounded and treated in an English ambulance. Whilst having his wounds dressed he was given his first cup of tea and a bacon sandwich.After the war he settled in the UK.

Monte Cassino Battlefield Tour for Germans: WHAT TO EXPECT

The “Monte Cassino Battlefield tour for Germans” (about 3 hours) includes:

2) about 3h30 guided tour of the German most meaningful sites of Cassino:

Monte Cassino Battlefield Tour for Germans: WHAT YOU MUST KNOW ABOUT THE TOUR 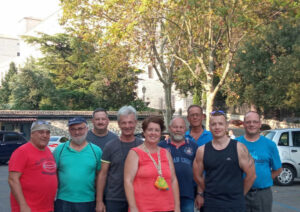