Trying to reach the north of Italy, the Canadians chose the road through Sant’Apollinare and San Leonardo as the main road. In the night of the 4th December, the Allies were next to the Moro River. General Vokes asked to his men, the to send patrols across the river during the night, to report which area could be the best to cross the river, considering that the river sides were very deep. Vokes followed the old highway 16 on the Adriatic coast toward Ortona, because he considered it to be the easiest and quicker way to go norther. On 6th December by daylight the Canadian were established in Villa Rogatti.

Ortona and Moro river Battlefield Tour: the attack to San Leonardo and the Moro river

The attacks that had to be toward San Leonardo and were a diversion for the main attack on the coast road were less successful than thought, because the were on Villa Rogatti after beeing counterattacked five times by the German of the 200th Panzer Grenadier Regiment, and the Seaforth Highlanders of Canada waded the Moro River with a lot of difficulties because the soft bed, but they succeeded in gaining only a small bridgehead and after a strong resistance and five hours of fighting, they decided just to remain were they were and they were sent to help it.

On the right side, on the coast in San Donato area, the First Brigade decided to attack the junction where a secondary road left the coast, but after a very hard fighting and 28 casualties the battalion had to stop and dug in for the night. After so many fighting, the Hastings, with their divertive action, were the only unit across the river. The new plan for the following days was very simple: on the left side the Princess Patricia’s Canadian Light Infantry had to cross the Moro toward la Torre, in the centre the Royal Canadian Regiment had to attack again San Leonardo and on the right side after the Highlanders attach the second wave had to join the road junction called CIDER.

On 8th December the Hastings were all on the other side of the river and the Royal Canadian Regiment started his attack, it completed a bridge across the Moro River, enabling to cross the river on their tanks but lost 21 soldiers on Ortona Battlefield and 53 were wounded or missing. After the crossing of the Moro river next to San Leonardo, the Canadian attacked the main Orsogna-Ortona road and in particular their aim was again what they called CICER CROSSROADS. Between the Canadians and the Cider crossroads there was what they called THE GULLY, where the 90th Panzer Grenadier Division had its strongpoint.

After several frontal attacks that the Grenadiers repulsed quite easier, General Vokes asked in the night of 11/12 December 1943 to the 3rd Canadian Infantry Brigade to flack the worst area of the gully and to arrive to the Cider, but the following German counterattack was too awful that the West Nova and Carleton and York Regiment were unable to continue the offensive. On 14th December, the French-Canadian regiment in the Army passed that gully on the right on a small track, to join first Casa Berardi and that the Cider Crossroads from the left, but already at the start line they came under heavy German mortar and machine gun fire.

Their attack was a near suicidal fighting, but they reached with heavy casualties Casa Berardi. All the other units that had to arrive with them in the same place failed , and those that at the beginning of the action were 81 men, at the end only 14 soldier were still alive, and with them only 4 tanks. The men established a circular defensive perimeter, with the soldiers in the middle, and the 4 tanks pointing in the four directions. The day after they tried several attacks toward the crossroads, but it was not possible to reach them. The Ortona Battlefield was really more difficult than they thought.

General Vokes understood the Gully was still in German hands and reinforced the Van Doos regiment at Casa Berardi. The operation was called “Morning Glory” and started at 8.00 on 18th December 1943 with a heavy fire, then the 48th Highlanders advanced and at the end of the action they had lost only 4 soldiers. The following operation was unlucky, because the Carleton and York Regiment was for a while under friendly fire so, the protective fire was cancelled and the Royal Canadian Regiment was put in enormous danger. On 19th December the First Canadian Division reached the Cider Crossroads: the road to Ortona was in front of them.

On 20th December the Canadian Royal Edmond Regiment and the Seaforth Highlanders of Canada attacked the Town of Ortona, and after fighting building by building on 28th December after 8 days of fighting the German troops withdraw from the town. The Canadian lost 1373 men on the Moro River and Ortona battlefield, almost a quarter of the Canadian lost during the Italian Campaign, and Ortona was called the “Italian Stalingrad”

“Ortona and Moro river” Battlefield Tour: WHAT TO EXPECT

The “Ortona and the Moro river crossing” battlefield tour (about 6 hours) includes:

1) pickup from your arrival at the railway station in Ortona every day at 10.00am

2) about 9h guided tour of the most meaningful sites of Ortona and the Moro River crossing battlefield:

“Ortona and Moro river” Battlefield Tour: WHAT YOU MUST KNOW ABOUT THIS TOUR

WHEN AND WHERE: Ortona railway station, every day at 10.00am (Main entrance)

WHAT IS INCLUDED: a van and ww2 tour guide

WHAT IS NOT INCLUDED: Lunch and dinner are not included 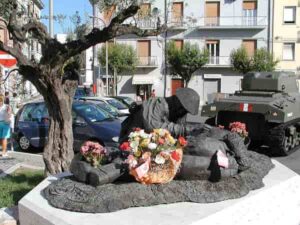