The 85th Infantry Division debarked in Naples on March, and the day after Mark Clark sent a selected detachment in the Castelforte-Minturno area. On 10 April 1944 the Unit attached north of the Garigliano river and held the defensive position for about a month on the 11 May they attacked Solacciano, Castelonorato and Formia.

The 85th Division Battlefield Tour: the 339th and 349th Regiment in Minturno area

The 339th and the 349th were sent to help the British troops on the left side. They had stormed them, crossed the river, and they hade made only a little progress in Castelforte area and Minturno area. The British needed ten days of hard fighting to get from the river Garigliano where the Germans stopped them. The Germans, the Americans had in front of them, were those of the 94th Infantry Division, General Coulter, the 85th Division Commander decided the 339th had to reach the left side of the 338th. The 338th had to move to the right while the 337th was relieved in its sector by the 88th.

The 85th Division Battlefield Tour: the Operation Diadem on the Minturno area

In the night of 11 May at 23.00 hours the great offensive began. The Germans knew that the Allied prepared the attack but they didn’t think that it could happen exactly that night. On the left side of the Division sector, the 339th attacked toward Hill 79 and San Martino Hill. The Polar Bear Regiment suffered many casualties in crossing the ground and the Capo d’Acqua small stream.

The 338th Infantry advanced toward San Martino but they met a strong German resistance arriving from some fortified houses. the 339th reached Domenico Ridge and took it the day later they attacked Hill 58. The 339th Regiment second Battalion reached Capo D’acqua and then the reverse slope of Hill 79.

The 85th Division Battlefield Tour: the Battle of Tremensuoli

The 3th Battalion 339th had an aquad of Company destroyed as they passed through Tremensuoli. the Company L tried to build with four planks, a bridge on the Capo d’Acqua stream but they were destroyed before they could get it. The Germans were firing them not only on the trail from Tremensuoli to Hill 113, but also from Hill 69 to 79. Company L had to swim to the other side of the bridge and then they secured the left side of Hill 69.

The 85th Division Battlefield Tour: fhe situation of 339th was not easier.

The night before the day of the great attack, a patrol of six men and a leader were sent to contro the enemy activity on the slope of hill 69. At 3.00 o’clock on 11 May they moved back to report the informations they had. In the afternoon on the same day, it was clear that the great attack was going to start at 23.00. The platoon leader showed his men photos of the hill 66 and the German pillboxes on the top.

The line of departure was the Capo d’Acqua Creek, about 1800 yards from the position the regiment had reached on hill 103. So at 22.30 the 1st Company moved in the direction of the line of departure. The Allied preparatory fire first, and then the Germans with their nebelwerfers, delayed the column and produced so much smoke and dust that the soldiers could see nothing around them. The men could not find the two temporary bridges the men had already placed, and so crossing the creek become very difficult.

The men lost a lot of equipment and ammunition in the creek and then many of them died on the minefields at the base of hill 69. During the crossing of the creek the radios were lost or not working and so it was very difficult to communicate the positions of the different companies.

The 85th Division Battlefield Tour: the victory on the Gustav line next to Minturno area

After having organized themselves the men were ready for the German counterattack. And the German answer was a heavy attack. At 13.00 on the 12th, a company tried to reach the Companies on hill 69 but they were fired. The situation in the rest of the defensive line was not even better. The 1st Battalion 339th Infantry met intense machine fire on San Domenico hill and Mt Scauri. The 2th Battallion 339th was on the crest of hill 79. The 1st Battalion 337th after a very hard fighting took the crest of hill 66. They were sent to assist the 3th Battalion.

The 85th Division Battlefield Tour: WHAT TO EXPECT

1) pickup from your arrival from Minturno-Scauri Railway station at 10.20 am.

2) about 3h30 guided tour of the American most meaningful sites of the Tyrrhenum sector of the Gustav Line:

The 85th Division Battlefield Tour: WHAT YOU MUST KNOW ABOUT THIS TOUR

WHAT IS INCLUDED: Minivan, ww2 tour guide and a local expert

WHAT IS NOT INCLUDED: Lunch and dinner are not included, but we can suggest..

WHEN AND WHERE: Minturno railway station, every day at 10.20 am (Main entrance)

GUIDES/LOCAL EXPERTS: I will held the tour with the help of Damiano Ianniello, a local historian.

The 85th Division Battlefield Tour: MORE TOURS IN THIS AREA

Battlefield tour on the footsteps of 36th Texas Division ⭐⭐⭐⭐⭐ 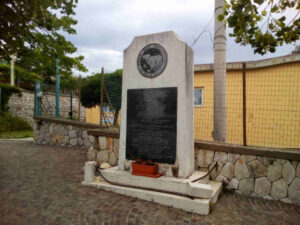