The struggle of Cassino and Monte Cassino Bombing in early 1944 was one of the most brutal and costly battle involving Kiwis forces in the Second World War. For the 2nd New Zealand Division, this German-held strongpoint southeast of Rome would prove the most tragically elusive prize of the Italian campaign, which lasted all together for 18 cruel months from October 1943 to May 1945. The commander of the New Zealand Corps (A temporary formation which included the 2nd New Zealand Division, the 4th Indian Division and the British 78th Division). Lieutenant-General Sir Bernard Freyberg, steeled himself and his forces for the battle ahead.

Desperate to minimise casualties, he requested a massive bombardment of the German defences to precede the assault, including the historic monastery of Montecassino, which was wrongly believed to contain a German Garrison. The subsequent aerial bombardment on 15th February laid waste to the monastery and its environs. Monte Cassino bombing was one of the most famous act of the WW2 European History.

This destruction, which Freyberg and his men believed to be a vital pre-condition for victory,actually proved to be counterproductive. Most of the German defenders in the Cassino Area survived, and the exploited the ruins of the town and monastery to create even more formidable defences. After another heavy bombardment, New Zealand forces fought their way into the devastated town from the north on 15th March. Once again, the German put up a tenacious resistance from hidden position in the middle of rubble that once again was Cassino town. After eight days of fighting from one shattered building to the next,

Monte Cassino Battlefield Tour for Kiwis: New Zealanders in the Battles of Cassino

Freyberg decided the cost was proving too high, and he ordered his troops to stop. Shortly afterwards, in early April, the New Zealand Division withdrew from the Cassino area, having suffered 1600 casualties, of whom 343 died. They will be forever remembered for the bombing of the Abbey and Cassino town, but It Is so Easy to judge now after 80 years…

The “Monte Cassino Battlefield Tour for Kiwis“ (about 3 hours) includes:

2) about 3h30 guided tour of the Kiwis and Maoris most meaningful sites of Cassino:

Kiwis’ Monte Cassino Battlefield Tour: WHAT YOU MUST KNOW ABOUT THE TOUR 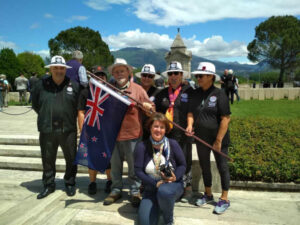 The Kiwis' Monte Cassino Battlefield Tour Is held by Anna Priora a ww2 Expert and local guide. Prices per person