After the Battle for San Pietro Infine in December, the US 36th Texas Division needed many replacements to be ready for a new battle. Major-General Fred Walker was worried about the success of the next attack and the lack of time for preparation. The Germans in front of 36th had excellent observation from the fortified village of Sant’Angelo in Theodice on a high bluff on the far side of the Rapido river in the centre of the valley.

Major-General Fred Walker knew it had to be a nighttime attack, but he was worried about the river itself that could be a formidable obstacle, and the many mines and the barbed wire were on both sides of the river. The attacking troops would have to carry their own boats to the river’s edge, where engineers would need to construct footbridges to get most of the vanguard troops across. But such bridges, General Walkers had discovered, were in very short supply, along with other engineering materials.

The Rapido River, south of Highway 6, was from twenty-five to fifty feet wide, nine feet deep, and fast flowing between vertical banks about three and a half feet high from water-level. The Germans had diverted enough river-water through irrigation channels to turn the eastern, or Allied, bank into a kind of marsh. The German defensive positions at the ruined village of S. Angelo and on either side of it were well developed and were at distances from the river bank of between two hundred and one thousand yards.

Montecassino battlefield tours: the Germans on the Rapido River

The crossing of the river started at 8.pm on 20th January, and after some hours of fighting the Americans counted 1300 dead men and 770 captured. Let’s learn the story of the 141st Regiment and the 143th Regiment trying to cross the Rapido River. The American Newspaper reports described it as the worst disaster since Pearl Harbour. The New Zealander officer Howard Kippenberger stated bluntly two weeks later: “Nothing was right, except the courage”“In an action that lasted just short of 48 hours, the 36th Division had lost more than 1000 men without making a dent in the German line.

Montecassino Battlefield tours: after the battles

Bitter arguments about the wisdom of the operation arose immediately, and after the War the veterans of the 36th Division Association called on Congress “to investigate the Rapido River fiasco“. They blamed it on Mark Clark, whom they called “inefficient and inexperienced”. Congress duly investigated and found no reason to blame him. The Secretary of War, Robert P. Patterson, declared that the action “was a necessary one and that General Clark exercised sound judgment in planning it and in ordering it”.(Wallace R., World war II, The italian Campaign p.117)

1) pickup from your arrival

B) Rapido river banks and the Peace Bell

C) The war monument dedicated to the 36th Texas Division

I) The Abbey of Montecassino.

36th Division War Tour: WHEN AND WHERE

WHAT IS INCLUDED: Minivan and ww2 tour guide.

PRICE PER PERSON 90 euros (lunch or dinner not included)

GUIDES/LOCAL EXPERTS I will held this tour.

MORE TOURS IN THIS AREA:

The 85th Division Grand Tour (From Scauri to Tremensuoli)⭐⭐⭐⭐⭐

Battlefield tour on the footsteps of the 34th Red Bull Division ⭐⭐⭐⭐⭐ 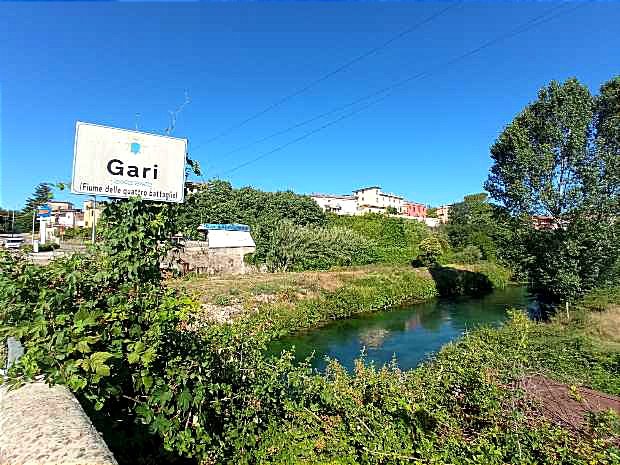