During the IIWW Monte Leuci was a strategical strongpoint on the Liri Valley. It was  on the German Defensive Line called “Senger-Riegel” Line, or better known as the Hitler Line (have a look here to read what happened in Aquino Area on 23rd May 1944). The position of this high hill on the main road between Pontecorvo and Pico was a dangerous obstacle for the Alleid advancing to north.

But it was difficult also for the French Expeditionary Corps and its Genaral De Goislard de Monsabert. He has the important task to attack the Germans on the left side, and he was successful in attacking Monte Leuci even if it was very difficult and it lasted only few hours. On 21st May 1944 the 26th German Volksgrenadier Division of General Luettwitz launched a counterattack and threw off the French from the top oh the hill.

During the fighting the Canadian artillery located on the other side of the Liri Valley, helped the French Army sending a great number of air strikes on the area where the German tanks were. The French attacked the area 4 times during that day. they lost men and time during the first three attacks, but during the last one they were successful, and they allowed the advance of the Allied until Pico.

The museum was opened in 2004, during the celebrations for the 60th Anniversary of the liberation of Pontecorvo, in an old little church on the top of Monte Leuci Hill. This little museum has a little collection of munitions, bombs, and weapons used during the different attacks in this area. There are also a lot of pictures, and original newspapers of that period. In the Plastico in the middle of the entrance are showed two soldiers, a German and a Canadian, rappresenting the hundreds of young people fighting here and dying in this area.

Monte Leuci Battle Museum in Pontecorvo: ALL YOU MUST KNOW

The “Monte Leuci Battle Museum in Pontecorvo” can be visited every day all around the year.

Monte Leuci Battle Museum in Pontecorvo: WHAT ELSE YOU CAN’T MISS IN THIS AREA 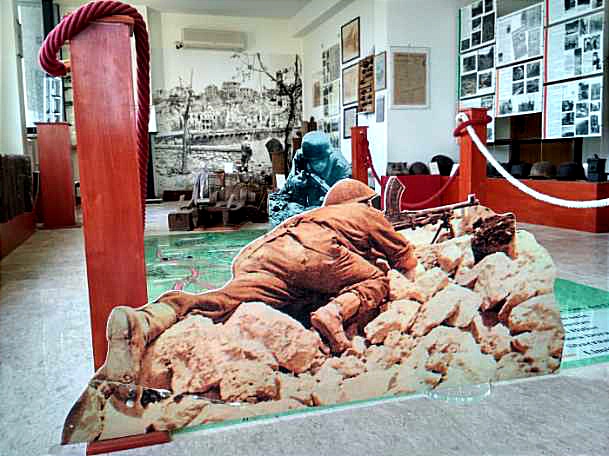