The 56th and 46th British Battlefield Tour on the Garigliano River. HiSTORICAL BACKGROUND

In the middle of January 1944, the American General Mark Clarke gave a very important task to the X British Corps. The idea was to realize a menacing bridgehead on the north side of the Garigliano River, very next to the coast, and to force the German forces to ask for reinforcement from the northern area. These forces must be as far away as possible from Anzio and from Cassino, where two different attacks were planned. Mark Clark asked to the British X Corps to attack in two different directions: the first and most important one must be toward Sant’Ambrogio sul Garigliano, and the surrounding hills, and the second one must be to the Ausente Valley, between Tufo and Castelforte.

The 56th and 46th Battlefield Tour: the Ausente River and the Garigliano River

The British General Richard L. McCreey knew his men were exhausted after the attacks on the Winter Line, and the idea of crossing a large river and then climbing a wall of mountains didn’t like him very much. He was not confident in the American attack on the Rapido River, but he had to follow the orders. So he sent the 5th and 56th Infantry Division to the Ausente Valley, and asked to one brigade of the 46 Division to follow orders and join Sant’Ambrogio. His idea was to send the 46th only after the first attack, about two days later.

Operation Panther started at 09.00 pm on 17 January , with mild weather, and the 94th German Division was taken by surprise. The diversion organized norther was successful, but at the beginning the biggest problems the British had were mines, all along the ford. Only later the Germans understood what was happening and they concentrated fire on the Engineers trying to build bridges.

Major-General Gerald Templer crossed the Garigliano River in front of Castelforte and Suio, and to attack the surrounding hill. To cross the large river, the Division could rely on 72 assault boats. For the assaults Templer chose the 167 brigade on the left side and the 169 on the right one, while the 168 brigade had the task on 11th and 12th January to destroy some dangerous German bunkers, without attracting attention of the Germans.

The 56th and 46th Battlefield Tour: crossing the Garigliano river

The 167 Brigade sent his three battalions toward 3 different crossing points:

After a first difficult attempt, the men could join the Castelforte-Minturno Road, and it seemed to them that half task had been already done. On the right side, General Lyne with the men of the 169th brigade, joined the original crossing point without difficulties, even if they had to drag boats for a long way.

Some men of the 2th Queen’s Royal Regiment crossed the river next to the Petronio Farm and Castelluccio Mount, so easy to be seen by the Germans. They worked under enemy fire, but the morning after all the men were on the other side of the river, while the others were more lucky and met only weak resistance.

Both the Brigades had been successful to cross the river, but when they joined the Mountain, they stated to have soon difficulties and they slump. In the evening of 18th January, the 9 Royal Fusiliers were on Colle Salvatito, the 8th Royal Fusiliers were on Monte Cianelli and the 7th was in San Lorenzo. The battlefield had been very bloody, but the men wanted to go further.

The 56th and 46th Battlefield Tour: the Skipton Bridge

On the right side, The Queen’s Royal Regiment was around Suio and on the hills. The sappers could build a 40 tons bailey bridge, and they called it the “Skipton Bridge”. It helped in the following days the Allied to cross the river easily, even if the river was always under German fire. The Germans represented by the 94th Infantry Division was reinforced on 20th January by the 29th panzer Grenadier Division, because Senger had organized a strong counterattack in Tufo, and between Cianelli and Salvatito Mountains, moving troops from the north.

On 19th January the 7th Oxford and Buckinghamshire joined Mount Cianelli and from here the British could control the battlefield of Ventosa, while the Queen’s had to repel the German attacks but then could not go further. Tired after so much fighting, the 168th Brigade replaced the 167th on Mount Cianelli, at San Lorenzo. But the Germans were ready for the counterattack. The German 15th Panzer Grenadier Regiment, with the help of the 276th Regiment started the counterattack on 20th January at 11.30 on Mount Cianelli, Mount Salvatito and the village of San Lorenzo, but the 8th Royal Fusiliers with the help of the 40th Royal Marine Commando could repel the attack.

On 22th January,the the Germans started another counterattack, and they took Mount Cianelli. At that point, the only solution was to ask for the help of the 46th Division and to concentrate all the efforts on a shorter attack line.

Even the 46th Division joined the Castelforte battlefield.

On 26th January Mc Creery sent the 138th Brigade 46th Division toward Monte Valle Martina, and on 28th they could join Ruffiano Farm. On 29th The Hampshire tried to join again the top of Mount Cianelli, but they were unsuccessful and the Ox and Buch that tried to joint and help them could do nothing against the German positions. That was the last attempt to conquer Mount Cianelli. In the night between the 7th and the 8th of February 1944, the British tried for the last time to attack the area. Starting from Mount Ornito, 2 battalions tried to join Mount Cerasola and Mount Faito, but the men were too exhausted to fight further.

The attack to the Garigliano front between the 17th January and the 8th February 1944 caused 4152 men died, wounded or missing, while the Germans lost 6444 men. If the attempts were unsuccessful, we remember that the Bridgehead the British conquered lasted until the end of May. The veterans remember the battlefield was covered by bodies…

During our tour we will follow the 6th Battalion diaries, we will walk on the “Sun Track “to join the river and the place where the Bayley bridge called “Skipton Bridge”was built. After the Bridge the road turn left and ran to a place they called “Skipton”. From there we will walk on a mule line until the Sujo Valley and then the Supply point called “Harrogate”. I will show you the Happy Valley, the Retelle Monument and all the WW2 highligh

“The 56th and 46th ” Battlefield Tour on the Garigliano River: WHAT TO EXPECT

The “The 56th and 46th ” Battlefield Tour on the Garigliano River” (about 3 hours) includes:

2) about 3h30 guided tour of the British most meaningful sites of the Aurunci Mounts:

“The 56th and 46th ” Battlefield Tour on the Garigliano River: WHAT YOU MUST KNOW ABOUT THIS TOUR

British Battlefield Tour on the Garigliano River: MORE TOURS IN THIS AREA 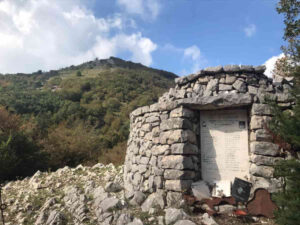