The Deutsche Bahn decided to remember the deportation on the Jews during the Second World War by building a Memoria in Grünewald S-Bahn Station, where the Gleis 17 was. Without the help of the German Railway the deportation of thousands Jewels would not be possible, that’s why after Germany has been united again the Deutsche Bahn decided to erect a memorial to remember all the citizen that had been send to Auschwitz and similar camps.

The competions between the different projects was won by 3 young architects Hirsch, Lorch and Wandel working in Saarbrücken and Frankfurt am Main. The memorial is composed of 186 cast steel with the number of Jewels, and the town were they were from and the destination they reach. The memorial was inaugurated on 27 January 1998 and can be reached from Berlin Grunewald S-Bahn station, following the Gleis 17 pannels.

The museum Is located in the middle of the former US-sector in Berlin and It Is an important place for those who want to know something more about the Western Power and organization in Berlin during the Cold War between 1945 and 1989. In the Exibitions It Is possible to see a reconstruction of the Berlin Spy Tunnel and the original hard cabin that was places at Checkpoint Charlie. It Is possible also to visit a GDR gard tower that was aced along the Wall, and by paying only One euro It Is possible to get on a Hastings TG-503 plane.

This big house, placed next to the Wannsee lake, was the place where on 1942 rapresentatives of Nazi goverment and SS officers meet to discuss what they called the “Final solution of the Jewish Question”. This building Is now a Museum to explain to the visitors what happened during that meeting, Who was involved and how the Plan was put in practice. With the help of videos, pictures and original documents It will be very aesy to really understand what happened here. To know something more about one of the rapresentatives have a look here

Now it seems only a very pleasant settlement in the middle of a forest, next to Zehlendorf but 80 years ago It was a very splecial place. In 1939 the SS decide to build a group of houses for ots own officers. It hard to be Just one of several residential complexs but this os the only One that was built and still existing. The officers were allocated in each house depending to the seniority and Number of children.

The ones that had the best provette units were the high-ranking SS officers, while the others without family and being a simple SS, lived in very simple Building with 3 storey. Many of the owners of these house were dead or were fighting somewhere when the Soviet invaded Berlin in April 1945, and so women and children left the building, so many refugees moved immediately after.

The site of Berlin War Cemetery was selected in 1945 to burry 3595 Commonwealth men that died in Berlin area and in the eastern Germano. The 80% of the men burried here were airmen died during the air-raids over Berlin, while the rest were prisoners of War, some of them died during the forced March from Poland to Germany. 397 men were unidentified and 5 of them are Poles

Spandau Citadell Is One of the most important still existing Reneassance fortress in Europe. During the WWII this fortress served as a secret chemical weapons development centre for Hitler and the Nazis. The fortress was armed with heavy artillery in early 1945 and became an important Nazi strongpoint for the Red Army during the battle of Berlin. On 1 May 1945, the fortress was surrounded by Soviet troops and conctacts were started with the commanding officers living inside.

Old town of Spandau and the bridge

If the German soldiers accepted to surrender themselves before 3 o’clock in the afternoon, the garrison would be spared and the building not destroyed. Many Waffen-SS soldiers wanted to continue fighting, but the commanding officers eventually decided to surrender. That’s why we can still see the building. To join the Castle a wonderful bridge decorated with war helmets of different periodes 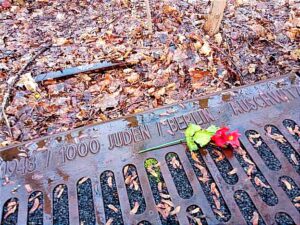